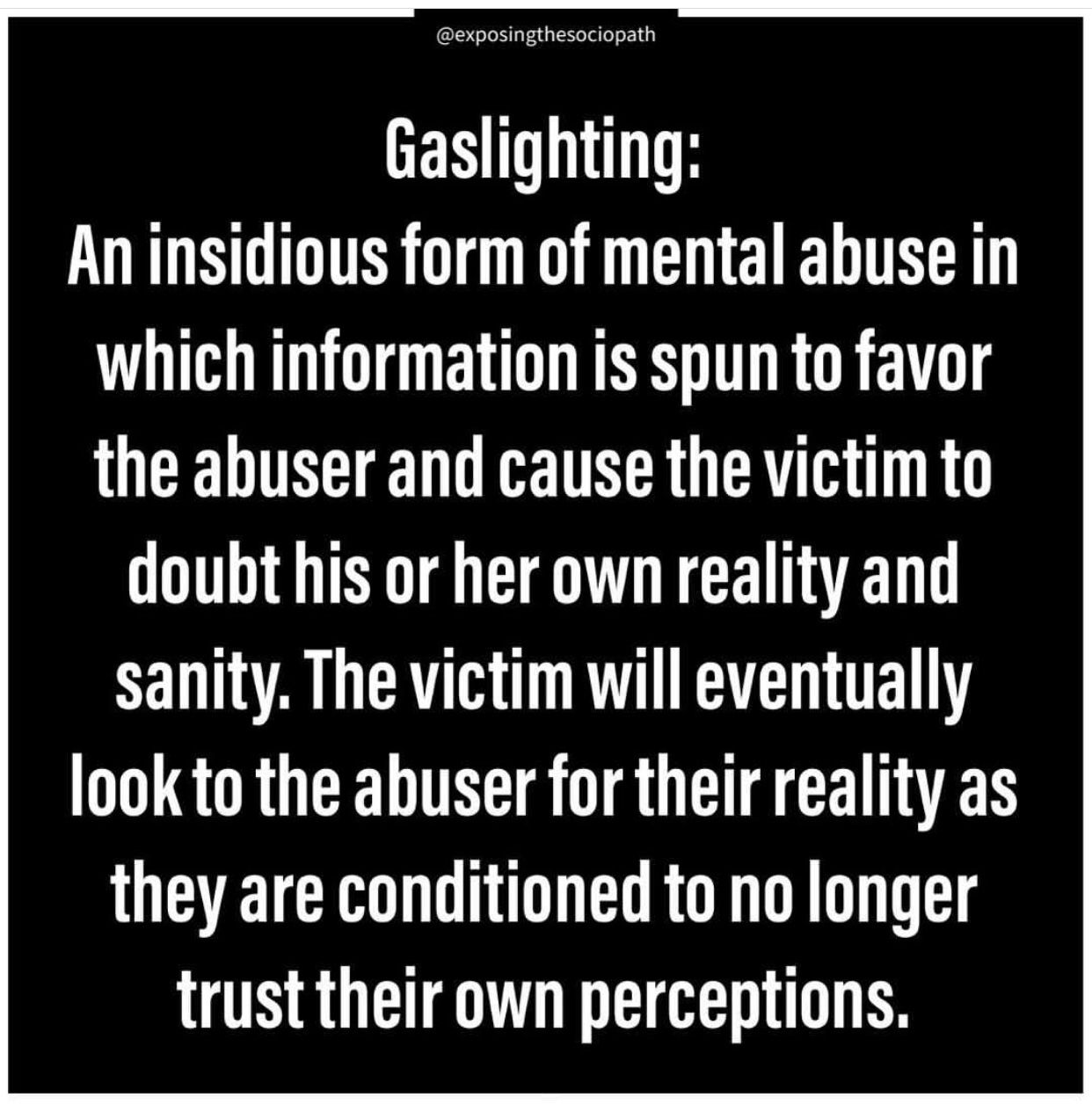 The Problem with Gaslighting

Well, I guess it would be easier to talk about what is NOT wrong with gaslighting, but since we’re here, let’s talk about it. When an abusive personality is adamant that you said something you didn’t say, did something you didn’t do, leaves out facts, add’s things to the story that never happened, and insists their version is the correct version, it can lead to a lot of confusion. “Am I crazy?” “Have I lost it?” ” I could have sworn I never said that” “That doesn’t sound like me”. All these thoughts are normal and this is what the abuser WANTS you to think. The more you question your ability to judge a situation, the more they teach you to depend on them to dictate your reality to you. YES, they will feed their perverted take on what happened into you and if you don’t have firm boundaries, they will convince you to not trust yourself and instead rely on their portrayal, which inevitably benefits them .  Ok now, STOP. Lets go back to that word “confusion”. That my friends, is the first sign of what could possibly be an abuser gaslighting you. I’m not saying that every time you don’t see eye to eye with your friend, family member, or lover, and disagree about how things happened they are gaslighting you, and must be a sociopath or narcissist, but you need to be aware of the things a pathological person will say and do. Do you see them telling little lies here and there to other people? Don’t brush it off and excuse their behavior. Little lies are still lies. And if they lie about small things, they will lie about big things. Please believe they aren’t just telling small lies to “other people” either. If they’re lying to other people, they are also lying to you.

How to Avoid Gaslighting

To avoid gaslighting, you first need to understand the techniques used against a victim:

Your best defense is education. BE AWARE. Know the tactics these toxic people use to manipulate and control their victims. Trust your experiences. Allow confusion to be your first sign of manipulation. Get things in writing, or even record conversations to better understand them . Remember little lies are still lies. And ALWAYS employ the rule of 3 as explained by Martha Stout Author of “The Sociopath Next Door”: “One lie, one broker promise, or a single neglected responsibility may be a misunderstanding. Two may involve a serious mistake. But Three lies says you’re dealing with a liar, and deceit is the linchpin of conscious-less behavior”

Instagram
After age 30 you begin to lose muscle mass at the rate of 3-5 percent per decade. 😱
He even elaborated “go have guy time while your woman watches the kids, and do it often”.
Someone mentioned on another reel they had just ended a 20 year “on and off” relationship. I also made this mistake at one point in my life.
Shaklee’s skincare is honestly nothing short of amazing. 100% of women were clinically proven to have YOUNGER looking skin and 2/3 of women shifted their skin to a previous decade.
*Disclaimer* I used this sound byte because I liked it. I am not suggesting women should use men.
Ok- I don’t ALWAYS get around to lifting weights, but I know it’s good for me so I want to more often and I’m speaking it into being!!
Follow Us
Archives
Top Posts & Pages